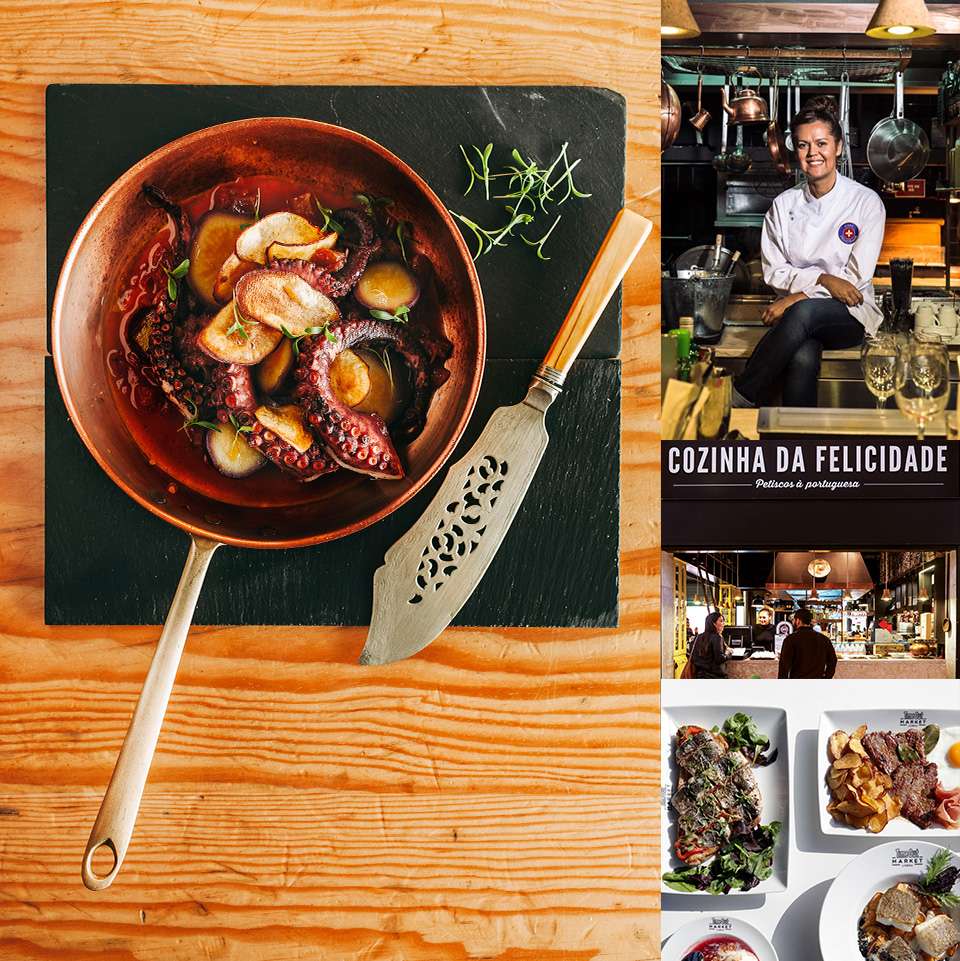 Snacks and mains from chef Susana Felicidade that take their lead from old Portuguese recipes.

Aside from the obvious association between food and happiness, this restaurant whose name literally means ‘Kitchen of Happiness’ is actually named after the chef that runs it: Susana Felicidade. A lawyer by training, she began serving food by the Praia da Arrifana, down in the Algarve, but to the great good fortune of Lisbon residents she ended up in the capital, opening a series of highly successful petisqueiras (informal eateries). She now divides her time between Pharmácia, up in the Bairro Alto, and this colourful corner in the Mercado da Ribeira, where you can sample various culinary inventions with very Portuguese flavours presented in simple and informal style.

Time Out Dixit “In the words of the chef herself, this project at the Mercado is a personal ‘Best Of’, with just a few adaptations. It’s as if a singer were to re-release an album with a few tracks remixed. But with the remixes turning out better than the original.”

In chef Susana Felicidade’s home town in the Algarve, Aljezur, octopus stew with sweet potato is traditional home-cooked food, but her grandmother used to make it in the beach restaurant she had at Arrifana in the 1960s and 70s. In 2004, when Felicidade gave up her career as a lawyer to devote herself to preparing food in a restaurant by that same beach, she took up the recipe again. Not only for memory’s sake, but to unite two important elements of the Algarve: the hills and the ocean. From just off the coast comes the octopus – “it must be octopus from the coast, which is the darkest, since it feeds on shellfish on the rocks,” the chef explains – which is cooked in a little water with onion, cloves, bay leaf and a bunch of parsley, on very low heat for 30-45 minutes. (A tip: the octopus is always first frozen for between 48 and 62 hours, to break down the fibres.) Meanwhile, onion and garlic is softened in olive oil with a bay leaf. The peeled tomato is added and the mixture is cooked slowly until the tomato has disintegrated. Then parboiled cubes of sweet potato are added, to be finished in this stew. To this is added the white wine and the water from the octopus, all on a medium to low flame. The octopus is cut into pieces – always keep one tentacle for each portion – and mixed into the stew. To serve, add a dash of olive oil and more parsley.