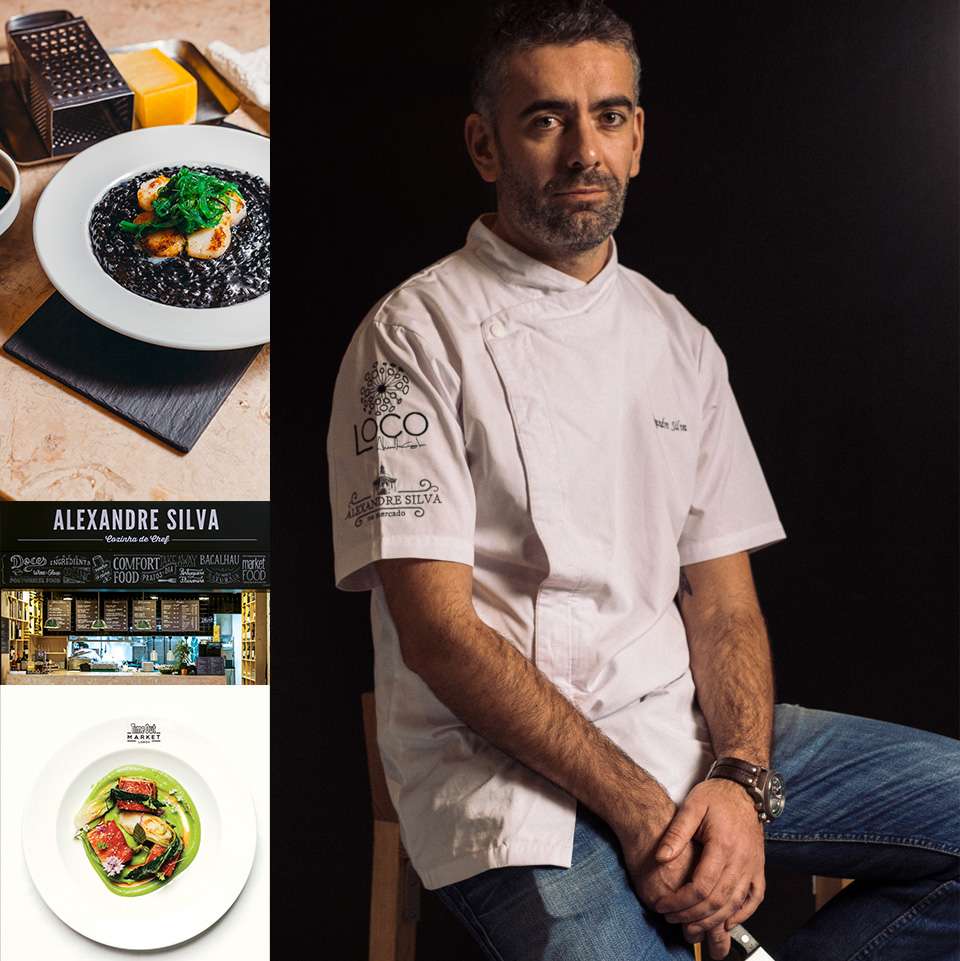 One of Portugal’s most creative and innovative chefs.

With a creative flair that is out of the ordinary, Alexandre Silva does more than reinterpret Portuguese tradition. His is a pure, free creativity with no sense of having to stick to any guidelines, even Portuguese ones. It was thanks to this flair that he won Portugal’s first televised Top Chef competition and also why his restaurant was given six stars by the food critic at Time Out – the only one ever to achieve that feat. At our market, Alexandre will be playing a little safer, with dishes that are guaranteed to be delicious.

Time Out says “Alexandre was one of the first Portuguese chefs to think for himself. That is, being guided more by his own creativity than by inspiration from books and tradition. It isn’t something that just anyone can do.”

Barriga de porco confitada com molho teriyaki, puré de ervilhas e couve pak choi
Alexandre Silva is one of Lisbon’s most creative chefs, but he still respects traditional Portuguese flavours. His aim – as with all the world’s great chefs – is to reinvent the dishes, recipes and even tastes that people know well, so as to give rise to new sensations in diners. This is probably the best example of that effort: a pork belly confit especially created for his outlet in the Time Out Market. Be warned: preparing it requires care and patience. To start, salt the pork and set aside for several hours, then wash it to remove excess salt. Wrap it in grease-proof paper and place on a deep oven tray. Then pour over enough vegetable stock to cover, cover the tray with aluminium foil, and put in at a pre-heated oven at 140ºC for 4 hours and 30 minutes. While the belly cooks, peel the potato and cook it in water and salt. Remove the potato, reserving the water, and put the potato and peas in a food-mixer to blend with a little of the cooking water, until the purée has the desired texture. Adjust the seasoning and set aside the purée. Are you still there? Then let’s continue. Put a pan of water to boil and blanch the pak choi (cook it lightly for about 2 minutes), remove and cool rapidly in water with ice. Once cold, dry on paper. When the belly is ready, remove it from the oven (which you should leave on), drain off the juice and allow to cool with a weight on top of the meat, so that it becomes straight and compact. Once the belly is cold, cut it into cubes and place in a frying pan, skin downwards, with a little olive oil on a low flame, until the skin is crispy and glazed. Remove from the heat and put back in the oven for five minutes to heat well. Heat the pea purée and put the pak choi in a frying pan to caramelise with a few drops of olive oil (keep turning until it is caramelised). Remove the belly from the oven, brush the cubes with teriyaki sauce (bought ready made) and arrange on plates with the purée underneath the pieces of belly and the cabbage resting on top.